7 February 2020 - Applied DNA Sciences Inc. (NASDAQ: APDN) (“Applied DNA” or the “Company”) a leader in Polymerase Chain Reaction (PCR)-based DNA manufacturing for product authenticity, traceability solutions, nucleic acid-based biotherapeutic development, and liquid biopsies for cancer diagnostics, announced today and in a late-day Investor Call yesterday, that it has expanded its existing Joint Development Agreement (JDA) with Takis Biotech to include the preclinical development of a linear DNA vaccine against 2019-nCoV, the new coronavirus that originated in Wuhan, China, infecting more than 28,000 and killing hundreds in just weeks. The advantages posed by PCR-produced linear DNA for this challenge include the speed of production, the absence of antibiotics and their resistance genes, the purity of the DNA, the simplicity of design, the powerful immunogenicity proved in a prior linear DNA vaccine, the absence of any bacterial contaminants and the fact that the vaccine gene is effective without insertion into the patient’s genome. 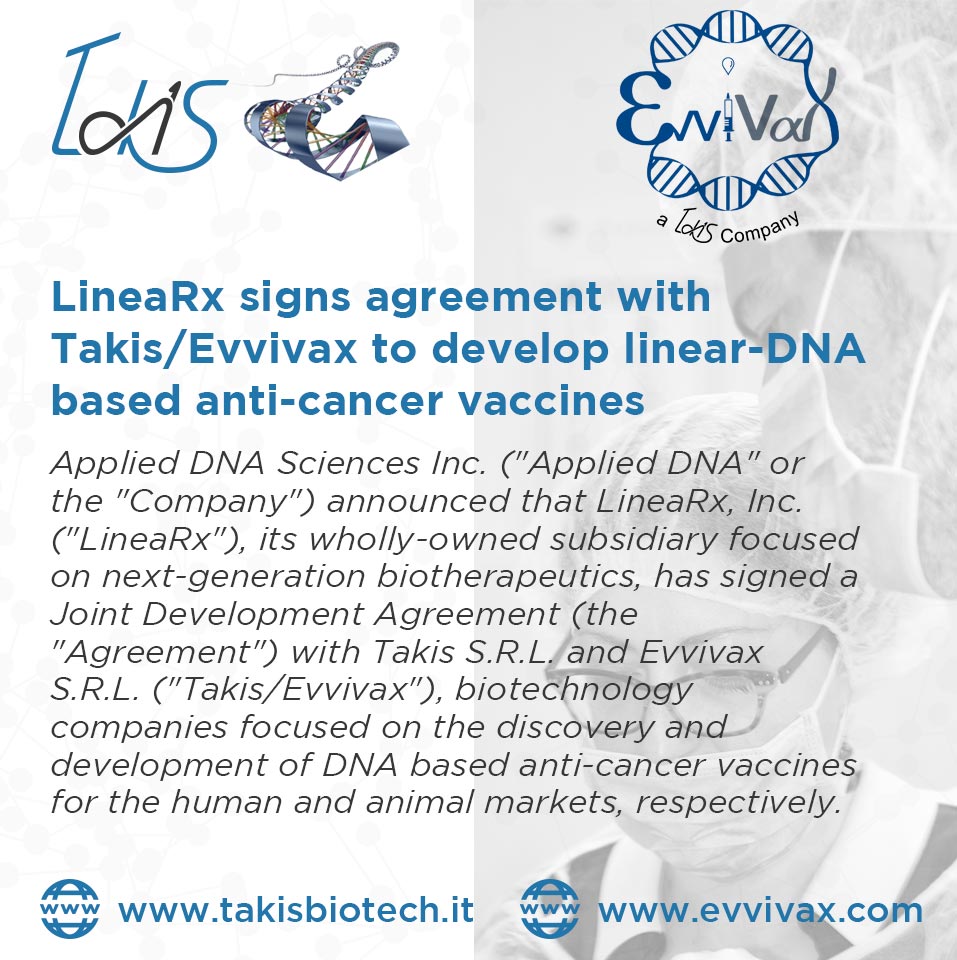 The virus expanded its hosts to humans and has been declared a public health emergency by the World Health Organization (WHO) and by the U.S. Department of Health and Human Services (HHS). LineaRx, Inc. (“LineaRx”) is the majority-owned subsidiary of Applied DNA focused on the therapeutic and diagnostic applications of the Company’s large-scale PCR platform that is protected by multiple issued and pending patents.

“We have a patented and proprietary platform for the production of linear DNA that empowers rapid development and large-scale production that we believe will yield a safe and effective vaccine with fewer risks than other DNA production platforms,” said Dr. James Hayward, president and CEO of both Applied DNA and LineaRx. “As is typical for RNA viruses, coronaviruses mutate at rapid rates that require constant surveillance.  We believe that one of the many benefits of PCR-produced linear DNA is the rapidity at which a putative vaccine can be revised to accommodate mutational drift.”

Dr. Luigi Aurisicchio, CEO/CSO of Takis, stated, “Our collaboration under the JDA on genetic technologies has already shown the ability to induce powerful immune responses in animal models using linear DNA.  To induce antibodies that can neutralize 2019-nCoV, it is essential to use reliable, effective technologies, that can be quickly adapted in the face of shifting pathogens. This global emergency requires a swift response.”

The companies are also developing a cancer vaccine that has shown rapid tumor clearance in test animals as reported this last September. Clinical trials using the linear DNA form of the cancer vaccine in companion animals are being planned. The Company has also participated in collaborative submissions for competitive contracts to develop related genetic countermeasures to protect American warfighters.

The collaborating teams have already begun the design and optimization of a synthetic gene that when delivered to muscles, should enable the temporary production of a designed antigen that could provoke an immune response against the virus. We expect to have linear DNA ready for testing within the next 60 to 90 days. Once the optimized gene is assembled, the Company will produce quantities of the linear DNA prototype vaccine at large scale for tests in mice. Prior evidence indicates that genes made of linear DNA reside only temporarily within the muscle cell nucleus, long enough to provoke an immune response, and is eventually cleared without genomic integration.