Fighting cancer by exploiting the immune system is a very promising field of research. From the earliest stages of tumorigenesis, immune cells function as guardians, prematurely destroying the mutated and potentially cancerous cells, In fact, immuno-compromised subjects, with a functional deficiency of their immune system, suffer from an increased incidence of tumor formations.

Nevertheless, even subjects with fully functioning immune defenses get cancer. Tumor cells therefore have the ability to escape the control of the immune system and multiply until the clinical manifestation of the tumor. The "escape" modes are varied, including the production of immune suppressor factors and the down-regulation of surface antigens recognized by the immune system.

Our immune system is intrinsically programmed to defend the organism from the onset of tumors, but occasionally it fails. What can we do? 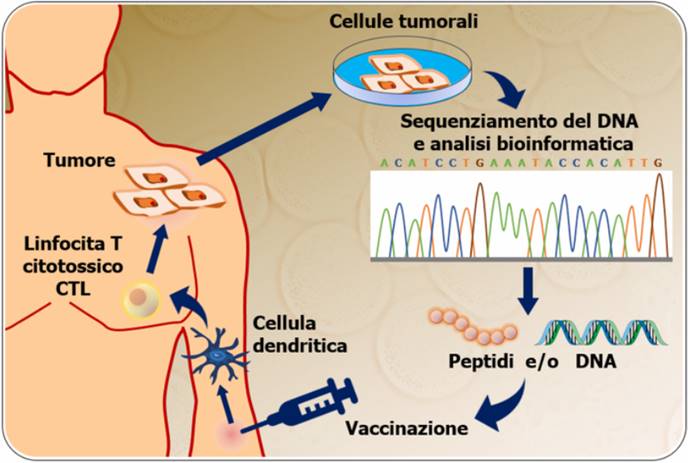 We can make cancer cells visible to the immune system. Tumor cells multiply at an altered rate and their DNA repair system is far less rigorous than in healthy cells. Errors in DNA replication also occur in the latter, but their repair apparatus works at full capacity, correcting them on the spot. Yet, when this mechanism fails to prevent the onset of a genetic mutation potentially harmful to the body, a diligent cell prefers to "commit suicide" rather than transmit a damaged or mutated DNA to the offspring.

Tumor cells, on the other hand, are anything but diligent: they lose inhibitory brakes and control systems, and consequently accumulate mutations. The tumor is therefore the product of a series of genetic alterations in random points of the genome. Then, a cancer cell is very different from its healthy counterpart. We can exploit this diversity to direct the immune response exactly against the desired target.

The generation of vaccines against cancer targets is potentially able to stimulate a specific immune response. A tumor target is the more specific the more its presence is limited to cancer cells. In the past, vaccines against so-called "tumor-associated" antigens have been developed, which are abnormally expressed in the tumor, but still referable to the "self" and potentially expressed in healthy tissues too. The current frontier of anti-cancer vaccines is that of the neo-antigens, mutated proteins randomly generated by the genomic instability of the tumor and therefore "non-self", totally absent in normal cells.

The purpose of vaccines against neo-antigens is to use these mutations as signals that distinguish cancer cells from healthy ones. Modern DNA sequencing techniques coupled with complex algorithms makes it possible to identify these alterations and predict the most immunogenic, which will be included in the vaccine, in the form of protein or DNA. The cells of the immune system will thus be "educated" to recognize and attack exclusively the tumor cells that express those portions of mutated proteins on their surface. A limitation of this strategy is the heterogeneity of mutations, which differ not only among individuals, but also among the metastases or sub-populations within the same patient. Before translation into clinics, it will be necessary to develop strictly customized protocols and characterize with increasing precision a wide range of immunogenic mutations frequently expressed. Selecting the most promising neo-antigens among the multitude of proteins expressed by the tumor is the limiting factor.
Pre-clinical studies in animal models have yielded promising results on a variety of cancers, including melanoma (Castle et al., 2012), colon cancer (Yadav et al., 2014) and sarcoma (Gubin et al., 2014 ). In  these cases a significant reduction in tumor growth was documented after the administration of the neo-antigens based vaccine, alone or in combination with immunomodulatory drugs. The feasibility of this strategy on patients has been demonstrated by some studies recently published on Nature (Ott et al., 2017 and Sahin et al., 2017), in which two types of personalized cancer vaccines have brought clinical benefits to patients with advanced melanoma at high risk of relapse after surgical resection of the tumor mass, without inducing side effects. Nonetheless, the number of patients enrolled in the studies was very small (10 and 13 respectively) and the results should be confirmed on a much larger sample to validate their statistical significance.

Several clinical trials are currently underway to verify the safety and efficacy of neo-antigen vaccines on other types of cancer (colon, kidney, glioblastoma) and often in combination with other therapies. Scientists are in fact of the opinion that a multimodal approach, which includes different therapeutic strategies (radiotherapy, chemotherapy, immunomodulatory drugs) in combination with vaccines, is a winning card against cancer. Personalized medicine aims at realizing customized therapies for each patient, in order to reduce side effects and maximize the chances of success. In a future scenario, cancer patients could benefit from a personalized vaccine containing the neo-antigens expressed by their own tumor and therefore more specific than any other drug. Even the cost of this therapeutic approach could potentially become accessible: genome sequencing costs a few thousand euros and according to some estimates the costs might drop even further in a few years.  With an optimized production process, the time taken to obtain the vaccine y was estimated around 4-6 weeks from the time of hospitalization. The prospect is that the advancement of technology will allow a further reduction in costs and time in the future.